There’s nothing quite like it. Coming back to your childhood home in one of the more cheery times of year. Summers in my hometown of Langley (Whidbey Island) were spent riding my bike, swimming at the lake or camping on the Olympic Peninsula of Washington, in the thick greenery of the Hoh Rainforest.

I just flew in from the desert, so the littlest of forest and city is a shock to me! On this travel day I can say I’ve been in a car to the airport, the plane, the light rail (our modern Seattle train), a commuter bus (going from downtown Seattle to the ferry boat terminal) yep, I take a ferry to my hometown and back in the car for a brief 10 minutes. Whew, now if that isn’t commuter life…

P.S. thanks Alaska Airlines for the free in flight wine. The perfect start going home to my wine maker parents.

Home is surrounded by trees, something is cooking, the door to the deck is ajar… usually a cat milling around. My parents are cat-sitting Trixie “the lap dancer” my Uncle Chester likes to call her heh! She’s a curvacious little lover, with some Twiggy doe eyes.

My mom has always been a crafty woman in the kitchen, and she always accomodated my forever evolving eating habits. Dinner comprised of a light vegetarian pasta with a simple olive oil and herb base. My parents recently returned from Paris & Amsterdam… so along with the usual homemade wines, after dinner we indulged in a baguette, herbed brie, walnuts and Asian pear. I have lately been experimenting with being dairy-free… and that went completely out the window obviously. C’est la vie!
Went to bed with the glow of my favorite glittery lava lamp and a little Bukowski.

I’m still an early riser, but mom is up even earlier. Being such an active gym rat now… I have to find activity. So, pulled out one of the many bicycles in the garage to take for a spin into town. It’s such a feeling, the speed and the wind makes my eyes water as I ride the short 3-4 miles to Langley. And here is where all your seaside/Rosewood town fantasies come to life…

Later that day, we trekked north to the farmland. Greenbank Farm is known for a nostalgic festival that worships the Loganberry, which is this sweeter hybrid of a raspberry/blackberry. Serious berry politics. Mainly the draw here is wine and pie. This tiny cafe gets packed to the gills with Dayle Coopers and his police force all tryin’ to snag a pie. And don’t even think about coming around Thanksgiving, where like 300+ pies are on preorder and that’s not even wholesale. But I digress… my lovely mother works the kitchen and I’m lucky enough to get first pick.

Not the Double RR Diner, but this is also “where pies must go when they die” Whidbey Pies

Dinner was at this roadside shack. Literally, The Shrimp Shack sits just outside of Anacortes (we’re on Fidalgo Island, now) proper. Another dietary thing that went out the window, vegetarian-ism. Why do I keep kidding myself?? Um, and did I mention some motha-fucking Manny’s beer!? When I’m home.. I’m indulgent…

I love my parent’s house. It’s nestled in the woods, there is never short supply of great wine and food. Waking up is refreshing. Pour-over coffee and sitting on the porch in the backyard, surrounded by the woods, birds chirping and distant cock-a-doodle doos.

You can always count on finding fun little random knick knacks at the local thrift store. Which there are several here. I spent a whopping $1 on a very necessary tool for success. A little Whidbey magic at work, folks.
And the beaches… are there some rocky, yet pristine beaches…

This will be the first bluff of the two in panoramic view. This beach has some major history dating back to the Ice Age. To this day amateur archeologists and beach combers alike find anything from pretty beach glass to fossils or pieces of mammoth tusks. A little later on in life this beach would be frequented by splashing kids, clammers, and skim boarders. And of course our high school squad partaking in illegal bonfire building, joint passing and boozing. No fires are allowed on the beach, but let’s just say there’s a sweet spot right around the second bluff that is best kept secret. You’d think we’d have boat cops staked out in the sound…

Prima Bistro’s Tijuana Mule @oldsoulcontessa
Langley will always speak to that temptation of easy-going life. When I see old friends who are in the conception phases of business ownership, or meet new residents that came all the way from NYC or other sprawling cities… it’s humbling. My reaction is always: “Damn! How did you choose this town, let alone find it on a map?” One of my lovely high school friends, Francesca is one of those few. She has been all over the world with her South African mother, lived in Austin for a stint. Now, I find her in Langley opening a gallery boutique and slangin’ beers down the street from my parents. We enjoyed a charcuterie plate, bone marrow, and several Tijuana Mules at one of my favorite staples, Prima Bistro, which is upstairs of the famous Star Store, where I tried my first jab at fashion retail. 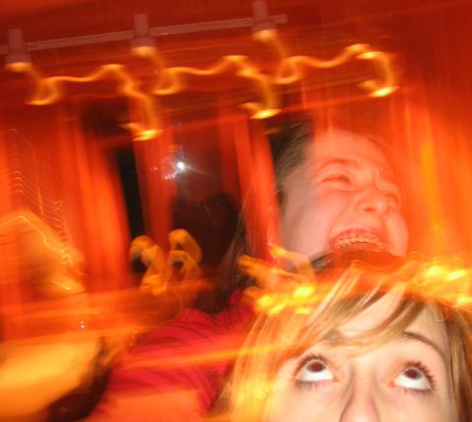 Fear & Loathing-esque Francesca (above) circa 2006. We shared our first libations together.

Being a twenty-something young adult on Whidbey is like an out-of-body experience. Langley is only in operation until about 10pm and even that’s stretching it. It’s a simple town of coffee shops, thrift stores, galleries, taprooms, boutiques and the library. So… no nightlife, wait.. yes nightlife, by way of the forest. The enchanted forests… heavily populated with flora and fauna… your in their territory now.

Until next time… Another magical creation by a gifted Langley green thumb.