Bolting out of Vegas on a sweltering day via ground travel. We drove a rental last time, which goes by in a flash! We opted for bus travel, aka MEGA BUS. Which is similar to the PNW Bolt Bus company. Pile a ton of sweaty people on a tube seemed like a fun idea… but it was just a sticky ride in our own sweat with little air coming through. HOW GLAMOROUS.  A little dramatic, yes, but really it’s a simple and cheaper option if your traveling light. Solution: plug in a podcast and drift away… all of a sudden we’re at Union Station in Los Angeles.

LA of course is notorious for the beat-to-death topic of transportation and traffic issues, so: car-less this time, we experimented with the simplicity of the subway system. It stretches from Union Station up to North Hollywood near University of Southern California. For us, all we need is something to shuttle us to downtown LA, Hollywood an everywhere in between. Now… introducing my favorite hospitality I’ve ever experienced… (and we live in Vegas) The Standard in downtown.

A modern boutique hotel with design features reminiscent of the Art Deco period. The Standard was once The Standard Oil Company and now historical landmark in “up and coming” DTLA.

Simple aesthetics in The Standard foyer
This piano along with a string of elevators welcome you at the entrance. On your way to front desk there is a Rudy’s Barbershop, the first place I started shearing my long brown hair in Seattle. I did go in for a trim once we settled in.

The main attraction to this one-of-a-kind hotel is to spend time in it to dream build. Being surrounded by a beautiful building, positive and hospitable people, a social and worldly atmosphere. The roof. Oh god, how I have missed the rooftop balcony amongst skyscrapers; btw DTLA is just a bunch of corporate bank headquarters…. but THAT VIEW…

First drinks at the rooftop of The Standard. Yep, I have a unnecessarily heavy coconut mai tai drink complete with embossed logo. HA!
We dressed up for DTLA dress code to go have a drink in the rotating lounge of the Bonaventure Hotel down the way. Sips: Old Fashioned & Mai Tai 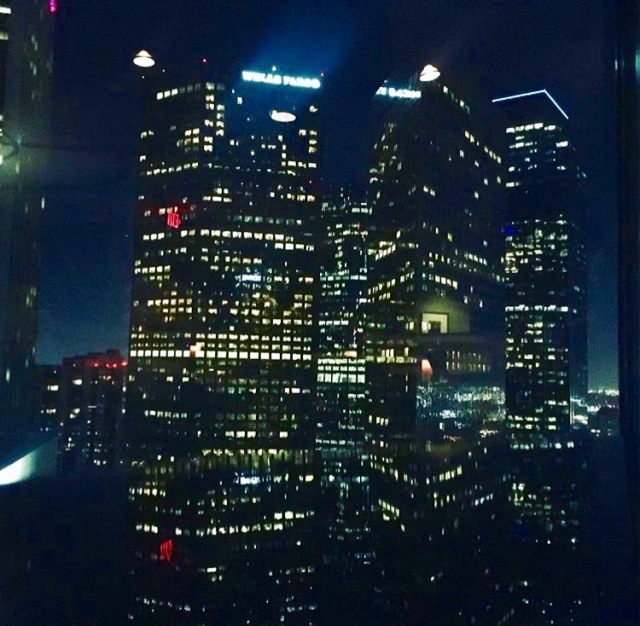 And since we’re on vacation… we ordered the fanciest room service! They even have vegetarian stuff and as Bachelor contestant Corinne would say “cheese pasta.”

The main attraction for this excursion is that we’re seeing… The Muppets LIVE at The Hollywood Bowl. Yes, The Muppets performing live with the Hollywood philharmonic orchestra. Meanwhile… we wake up and find ourselves on the roof. I still can’t quit coffee and there is the most adorable coffee alcove (Hermano’s) nestled under the staircase in the lobby… I can’t even.

Black as midnight on a moonless night.

Amongst a golden 70s 24/7 diner. Complete with hip avocado toast.
We perched on the rooftop alllll day. 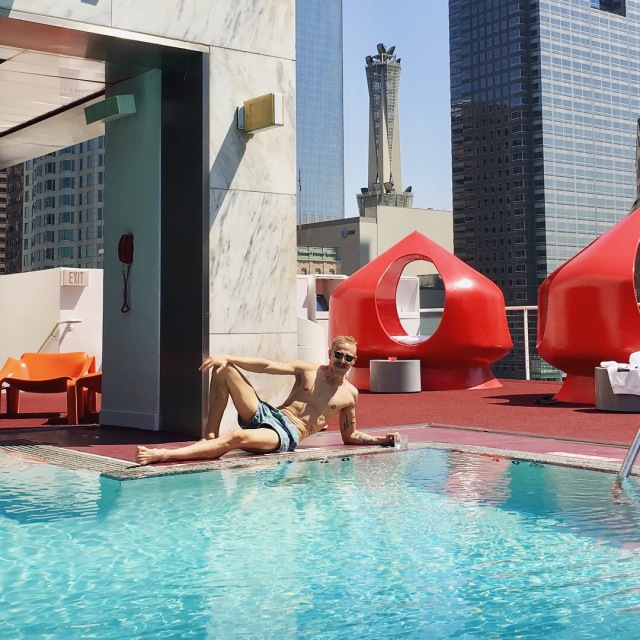 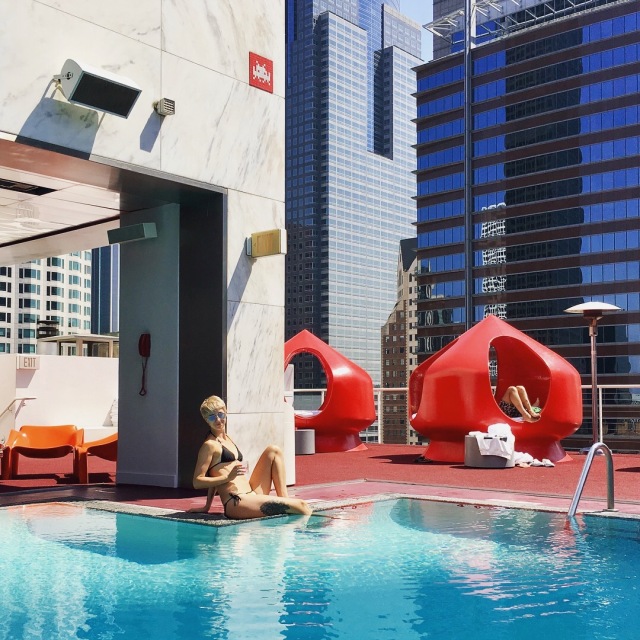 Before we headed down to get ready, margaritas and a sandwich to share from Banh Oui Vietnamese/French fusion pop-up menu at The Standard rooftop.
And off to the subway! By the way, phone GPS lies.. it takes maybe 20 minutes to get to the Hollywood Walk of Fame stop on the subway. Nothing! Compared an hour of commuter traffic.
One of our traditional stops, we wander around the stars, Stu looking for WWE CEO Vince McMahon. Of course we passed many a Scientology book shop, (conspiracy post coming soon), and Jim Henson’s studio on our way to Sunset Strip. 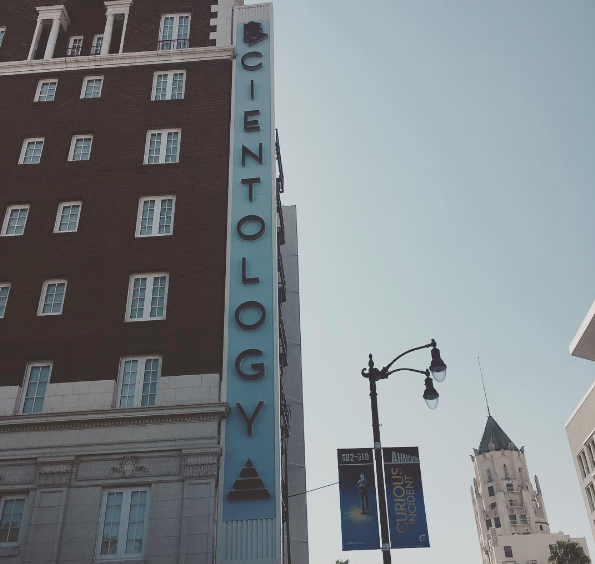 And after eons it felt like… walking in flats… in LA… stupid decision on my part!  “…I cut my foot earlier and my shoe is filling up with blood..” -Romy & Michelle’s High School Reunion.

We arrived at MY favorite place: Toi on Sunset “Rockin’ Thai Food.” We settled in to some happy hour spring rolls, wontons, noods, cold sake and Chang’s. We posted up here for the remainder of the evening until showtime!

So after a few rounds of sake, and added another shirt to my 4 for $10 bad tourist T-shirt collection, we climbed into our Uber, popped an edible each and cruised up to the Bowl. The only other show I’ve seen here was Weird Al, and there were a few kids, sure; but this night… my god it was like a whole school district and their families. Everyone had a picnic spread and everything! It was a regular minority tailgate for a world famous puppet show! 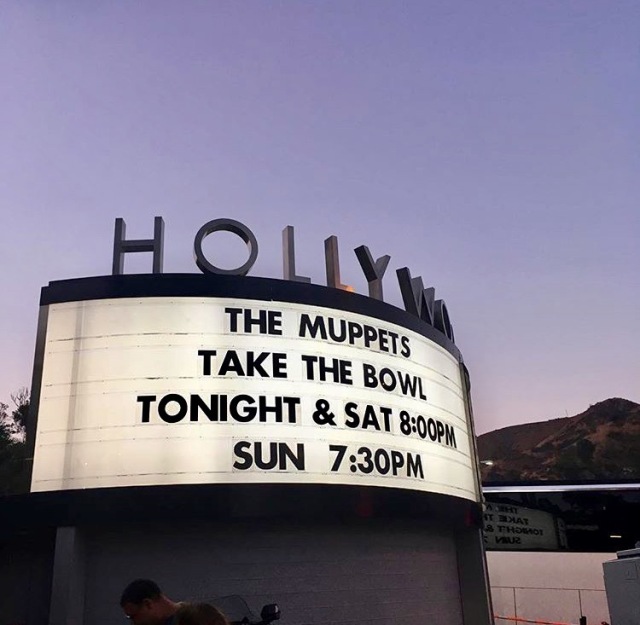 This was a treat and a memory I will cherish. A little blasted and a little wine kept me warm on this cool night in Hollywood. I have never laughed so hard… Electric Mayhem even did some Bowie covers. 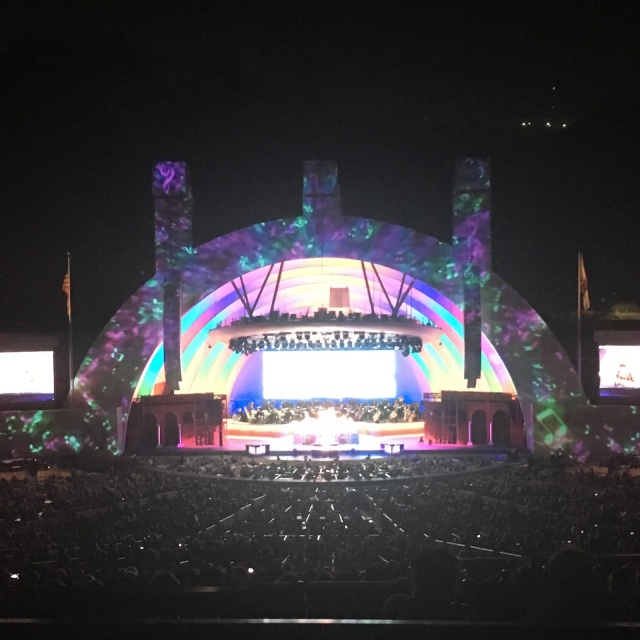 It’s a day of sport ball. To amp myself up for this all day event of USC football, I HAD to make it to the gym. Luckily, The Standard offered the bare minimum for someone to break a sweat. We showed mom around the hotel, had some breakfast and headed off to the campus to tailgate!

Before we left Vegas, we placed a bet on the USC Trojans to win with some kind of over. So, with money riding on it, I payed a littttttle more attention. And we WON! 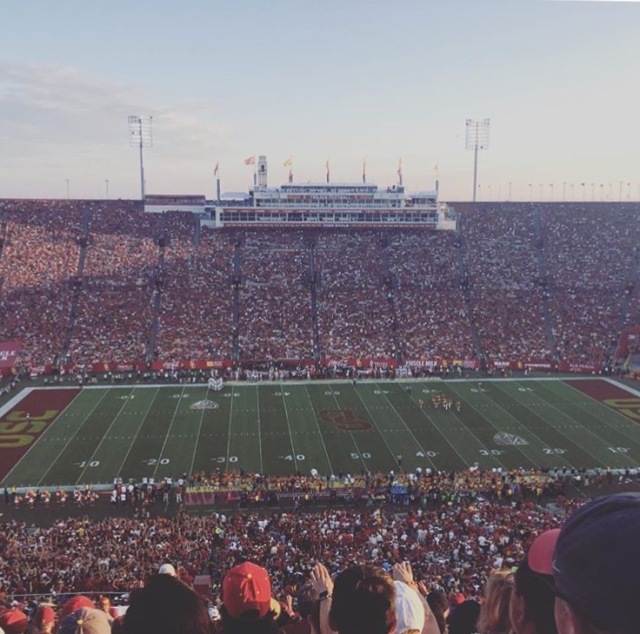 The band rivalry made the energy between USC and Stanford. Being a high school band geek, I can relate; and it’s true, the band knows how to party.

Day off. No plans but relaxation. Aside from the Banh Oui pop-up menu, The Standard’s own appetizer offerings did not disappoint. After hours of basking, reading, writing and splashing we headed across the street to Public School 213 for happy hour and… maybe some more football. 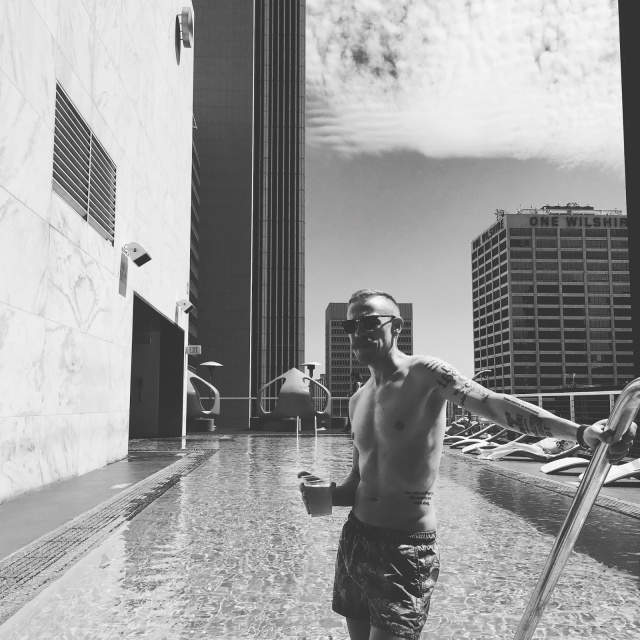 And the Cha Cha tradition continues! I love empty bars..

More importantly, a day at Hogsmeade! So with butterbeer in hand, we headed straight off to Ollivander’s to pick out a wand. A wand fit for a Ravenclaw graduate; It happens to be the same as Luna “Looney” Lovegood’s. So, after a few ciders with a shot of fire whisky, I was feeling the magic coursing through my veins…or liquid hype. We fed Adam an American breakfast (no, British beans on toast) at the Three Broomsticks, more butterbeer before taking on the castle.

Back of the line Muggles! 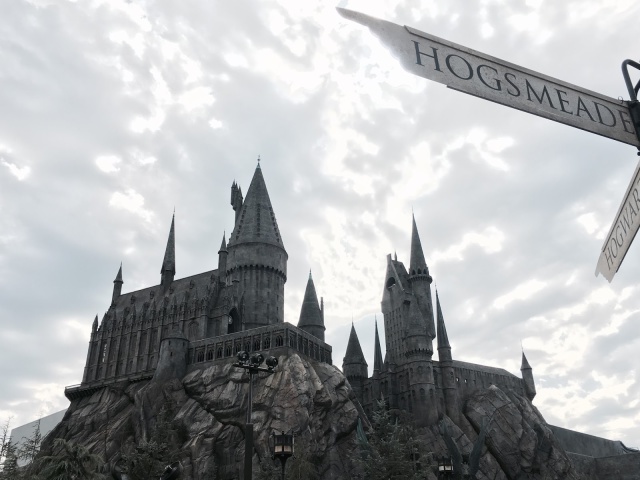 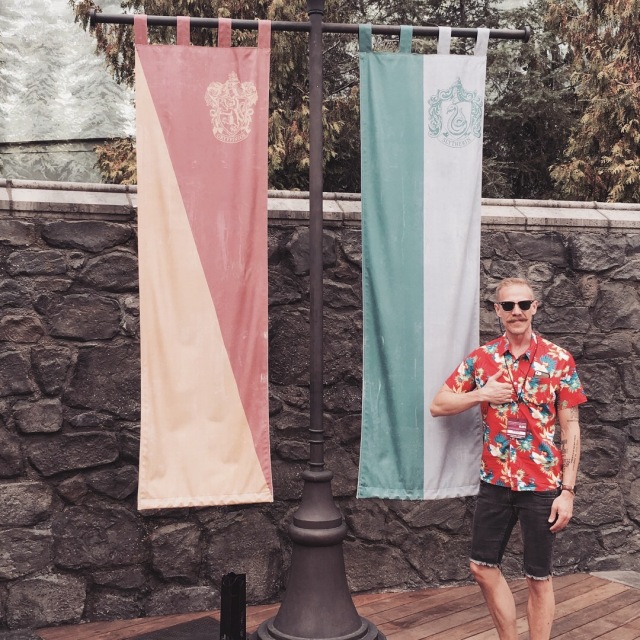 He went to the dark side.

About to bewitch some more brews. Make your own butterbeer at home that is almost like the  coveted, magical delicious-ness.

Patiently waiting for Moe’s to open up…
Eventually we ended up in Springfield for one large Duff to carry with us about the expansive Studio City. It was a long day of wandering, riding the rides, getting drenched at Water World, and casting spells. We polished off our vacation with the most relaxing last night ordering room service and vegging out. Thanks to The Standard downtown for having us, we wouldn’t stay anywhere else from now on!