While I have only viewed the 2014 Royal Rumble and bits of last year’s match, 2018 will go down in history. Like Ric Flair said “With A TEAR IN MY EYE…” My husband and I genuinely were (ARE) so excited that Shinsuke Nakamura won the Royal Rumble after a close squabble with Reigns.

I’ll be candid and say I’ve only been more engrossed in the Wrestling world as of very recently. When I saw Roman Reigns win the 2014 Royal Rumble, it was almost too predictable… I mean the graphics from the pay per view were in some sort of Old World “Roman” typeface. My husband, a long time fan, was NOT happy. Also, NOT happy when, Randy Orton took the win last year. While the business side of the WWE has consistently been grooming their “top dog” to lead the brand, fans have always expressed, quite vocally I might add, otherwise. I’m not a fan of Roman Reigns, though I know many females would say otherwise. He simply does not capture my attention when he’s on the microphone, which is almost, if not more important than a wrestler’s in-ring abilities.What was so gripping about watching the latter half of this year’s Royal Rumble match, was that (spoiler alert) Reigns outlasted many until he was part of the final four. I’m thinking… ‘please not again.’ There were a few surprise entrances like Ray Mysterio who I’ve only seen as a mentor on WWE’s reality series Tough Enough (I’m SUPER new…) but, I’m impressed by his in-ring action, which is heavily reliant on gymnastics! My favorite!

The final four in the ring… We have the business Golden Boys side: John Cena & Roman Reigns and the fan favorites: Finn Balor & Shinsuke Nakamura. The past few year’s, the WWE has been giving the coveted titles to the most hated baby faces, Reigns and Cena. So, when it came down to Reigns vs. Nakamura… we were both on the edge. With the crowd chanting Nakamura, it had to happen. AND IT DID! Shinsuke Nakamura, the king of strong style took the win.

One hundred percent of the wrestling I’ve viewed has been introduced to me by my husband in an attempt to get me past rolling my eyes and to take an interest. When he showed me Shinsuke Nakamura’s entrance back when he was in NXT, I was pretty impressed and we were instant fans. He’s unlike any other wrestler: very Freddy Mercury in mannerisms, has FACIAL EXPRESSIONS and a mocking personality in promos, Nakamura is an international glam rock superstar. So, out of all the rigid-jawed, superman-esque, goody two-shoes wrestlers out for the win, I’d say it’s a great time to invest in the guy with style. This is who the fans want.

The next pay per view will be in our own Las Vegas, so we’ll see where Road to Wrestlemania storyline take us at Elimination Chamber. And of course, there’s a Women’s Elimination Chamber match as well. Though after the double Royal Rumbles I hope the WWE rethinks their booking for this pay per view. I have a hard time sitting through RAW alone, which is skirting three hours. Two Royal Rumbles in one pay per view was a stretch.

Now, onto the ladies

It’s rough to have two hour long Royal Rumbles in the same pay per view combined with other matches that have storylines of their own to uphold. So to keep that crowd alive, the Women’s Royal Rumble unveiled not only all of the current talent, but worthy veteran wrestlers and Hall of Famers such as Lita, Trish Stratus, Jacqueline and Beth Phoenix. I was familiar with most of these names from watch a few Hall of Fames in pervious years. But, then there were some entrants that I was like.. “wtf?! Who?!” Whatever, many of them were before my time and didn’t last long. Sasha Banks, the first entrant outlasted most ladies at 52 minutes into the match.

A funny tweet by Member of Absolution, Mandy Rose said: 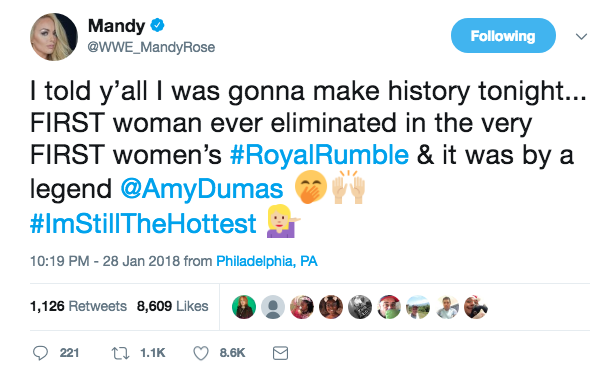 It was a night of firsts.

And of course, what really got me into wrestling, the Total Divas stars Nikki and Brie Bella entered in at #27 and #28. Brie was eliminated not too long after by her sister after they utilized “Twin magic” fighting techniques until the final two were Nikki and Asuka. Seeing that Nikki Bella does not currently have a full time storyline, the winner is CLEARLY Asuka. She is an undefeated entity. That unstoppable storyline has been playing ever since Asuka was called up from NXT. Also, Stephanie McMahon might have gave it away on commentary by saying “She’s getting over.” The crowd gave Asuka a well deserved pop and as Charlotte and Alexa Bliss entered the ring, she’s looking back and forth between the RAW and Smackdown champions, carefully taking her pick…   AND THEN… its true, oh it’s damn true…

Ronda Rousey enters the ring as #31 in *Rowdy Roddy Piper’s leather jacket and her own merchandise in Piper’s graphics. What an homage. I think everyone in the WWE universe was expecting this, though I was fooled by the media and said there is NO WAY she was in attendance. Her being in Columbia was totally a work. Ronda Rousey made headlines the next day as she signed full-time to the WWE. The stories continue as we head down the road to WrestleMania 34. Will it be Stephanie vs. Rousey? Charlotte vs. Rousey and Asuka vs. Bliss? We will soon find out.

*How the hell do I know who Rowdy Roddy Piper is? I watched a certain pay per view or special focusing on the notoriety of Piper. I specifically remember him smashing a coconut onto his opponent’s head, and yes, it broke into a bloody coconut mess. More recently I watched another WWE network reality show called Legends House, which follows certain Wrestling Legends, like Mean Gene Oakerland, Hacksaw Jim Duggan, Jimmy Hart (The Mouth of the South) Piper, and several others. It’s the most ridiculous group of old timers and each day they have to complete some sort of bizarre task or group challenge. Who knew, putting together a bunch of ancient personalities would be so entertaining.