I’m checking my Google Calendar to see when the next few markets are scheduled and realized I didn’t have any lined up! So I went into Instagram to see if the usual ones I follow had any dates logged in and in my suggested follows I see Anytime Austin Market is a new-ish account. I’m not entirely sure how long they have been hosting patio markets outside of the newly re-branded Revival Coffee (which is so cute, decked out in millenial pink decor) I decided to attend their next one and check it out.

Chill house music pulsates through speakers on a stage outside Revival Coffee’s patio space. Several booths are nestled in front of a giant ice bin full of Blue Norther Hard Seltzer, which supplied the event with free libations while supplies last. Weaving in and out of the different clothing racks there were even vendors that drove all the way out from Houston and San Antonio to showcase their collections.

Here is a complete list of sellers that set up shop over this particular weekend:

Future markets outside of Revival Coffee will surely take place EVERY weekend, weather permitting. It’s the perfect setting to bring out-of-town visitors, vintage treasure hunters, antique collectors, and everyone who loves supporting local Austin vendors! Keep an eye out for Anytime Austin’s future markets by following their page as well as Revival Coffee by Gabrielas.

Join me for my typical Sunday stroll in a surprisingly warm December.. so this is the holidays in the tropics? Not mad about it. Thank you to Bat City Artisans and Sunday Market for hosting these collectives of small business owners and creatives here in Austin.

We left in the wee hours of the early morning night, just barely past five o’clock AM with two cats and our single moving pod.

“Should we get two of them?” Adam asked when we initially escalated our moving efforts.

Abiding by the “make it work” mantra, we decided to roll the dice and pack one pod again after successfully moving our Seattle studio apartment down to the desert valley three years ago. Though as time passes and you have more space… your life slowly grows an aesthetic accumulation of… STUFF.

We left one drawer set behind that was broken, but managed to fit all shelves, bed frame and each room broken down into that damn metal box with not an inch to spare.

So, with two cats under the influence, one packed trunk and two crazy humans with a belief, we headed east into one more dusty pink desert sunrise.

Day 1: Leaving the neon desert of Las Vegas to the mystical rouge of Sedona 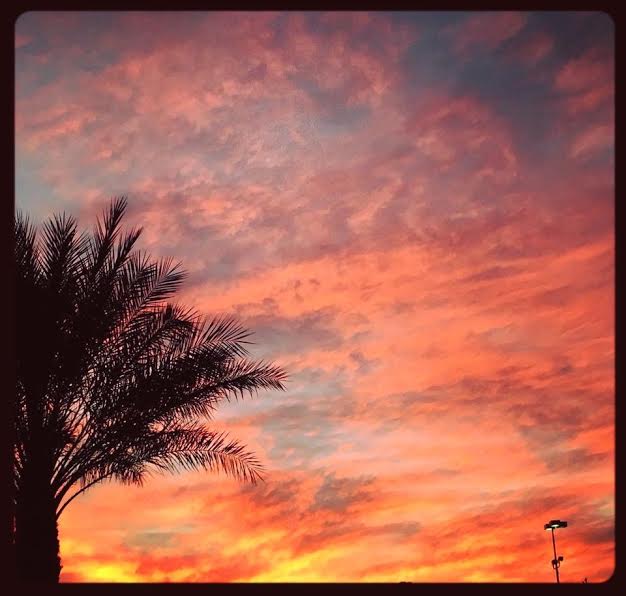 How to travel with cats should be its own blog post, because I really don’t want to soil (spoil?) this post with my many laments about drugging our pets. There were a few angry rants from both parties FOR SURE.

Driving to Sedona was pretty quick, a little under two hours. Once I began to see trees and more red rocks in the distance I knew we were getting close. We passed through many levels of terrain, winding canyon roads and through a myriad of landscapes. Upon entering the area, we were welcomed with riverside resorts scattered with intimate cabins, campgrounds and increasingly more signs for crystals and palm readings. 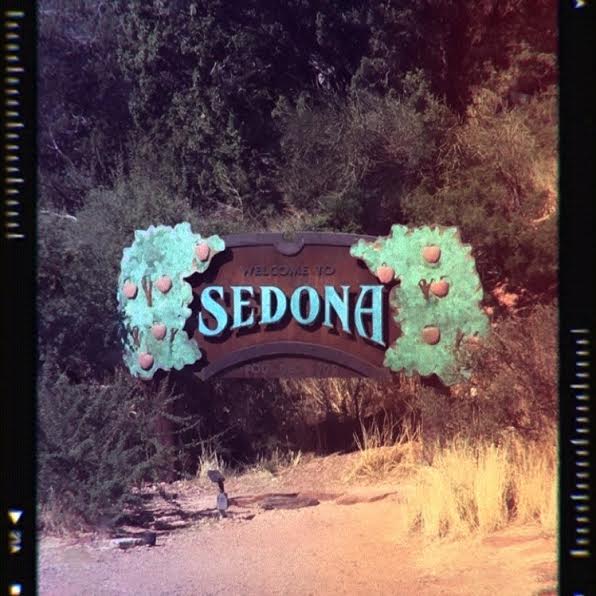 Sedona is really known for the vortex, or plural “vortices”, a centrifuge of energy and uplifting opportunities for reflection, self-discovery and contemplation. The positive energy must have been especially strong, because we luckily found a place to stay after one hospitality chain denied us for having cats (but, you could have dogs…?) So, for the rest of our trip, we kept the cats kayfabe. That’s wrestling speak for being in character, aka we snuck our cats in everywhere!

The one lane highway that Sedona is situated in makes it longwinded for traversing after already driving all morning. So, we decided to pick one beautiful space to relax and have lunch after we left the cats to cool off and come down. 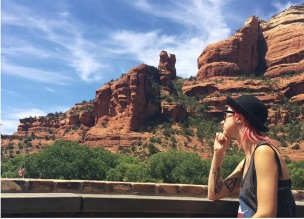 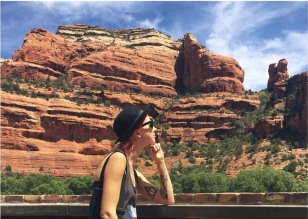 One takeaway from Sedona is the absolute natural beauty of the red rocks and the way the sun kisses the earth each time she rises and falls. The mysticism is certainly alive and well if you take a stroll along the Arizona State Route sidewalks. You will never be short of art galleries, mom and pop shops, crystal and oddities shops, all surrounded by ruby, rusty hues and top desert real estate. Sedona is absolutely worth a visit for a few days to soak in the energy and epic beauty of the desert. 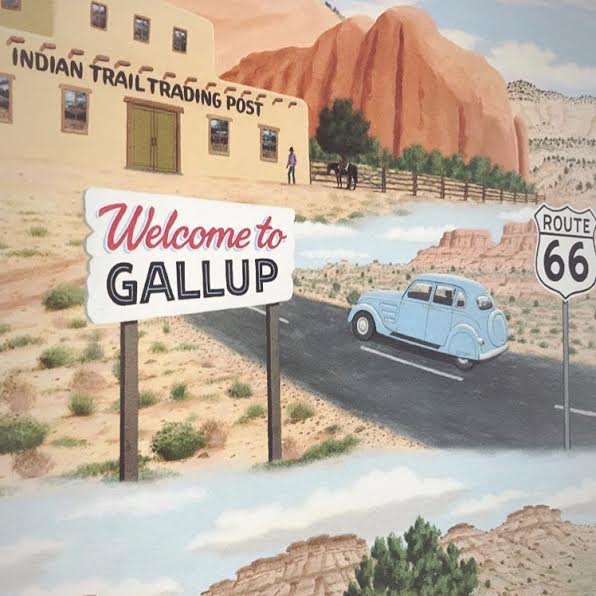 Each day we woke up at 4AM to get a head start in the dark before the heat settled in. With this much headway we are usually able to arrive in the early afternoons to our destination.  Of course, it wouldn’t be a road trip without a few hiccups along the way. On our first stretch out of Las Vegas, Aria had a little accident and didn’t go do her business in the box provided. Like, what?! C’mon cats…  So, we pulled over tried to clean it up as much as possible and got on our way. On our way out of Arizona we were pulled over by a cop probably in his twenties. With our car packed to the gills, smelling like piss and Nevada plates this clean cut state trooper clearly thought we were packin’ the goods. So, I’m just waiting around in the car, comforting my stoned cats and Adam finally comes back:

“Well, he gave me a sobriety test. It’s no worries though I know how to talk to cops. I think that was some serious hipster profiling we just received though.” Adam with the sarcastic comic relief everybody.

After about twenty minutes of schmoozing and reassurance, we were let off with a warning for “an obstruction of view” for our tacky fuzzy dice hanging off our rearview mirror. 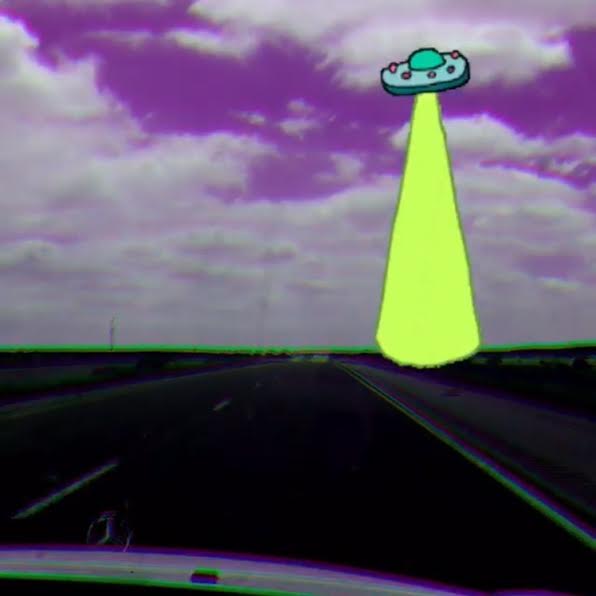 The drive to the middle of nowhere, USA aka Roswell was by far our longest day driving, or so it felt. Roswell, NM is a small remote city (200 miles away from any other residential areas) and is historically known for being the alleged site for the 1947 UFO crash. Since then, Roswell opened the International UFO Museum and Research Center for those interested in the lore, research and stories of what actually happened back in 1947 and beyond. Roswell is also home to Anderson Museum of Contemporary Art which hosts various art shows from the Roswell Artist-in-Residence Program. Oh, and Roswell’s Main Street is adorned with street lamps shaped like alien heads. It’s the little things, right? 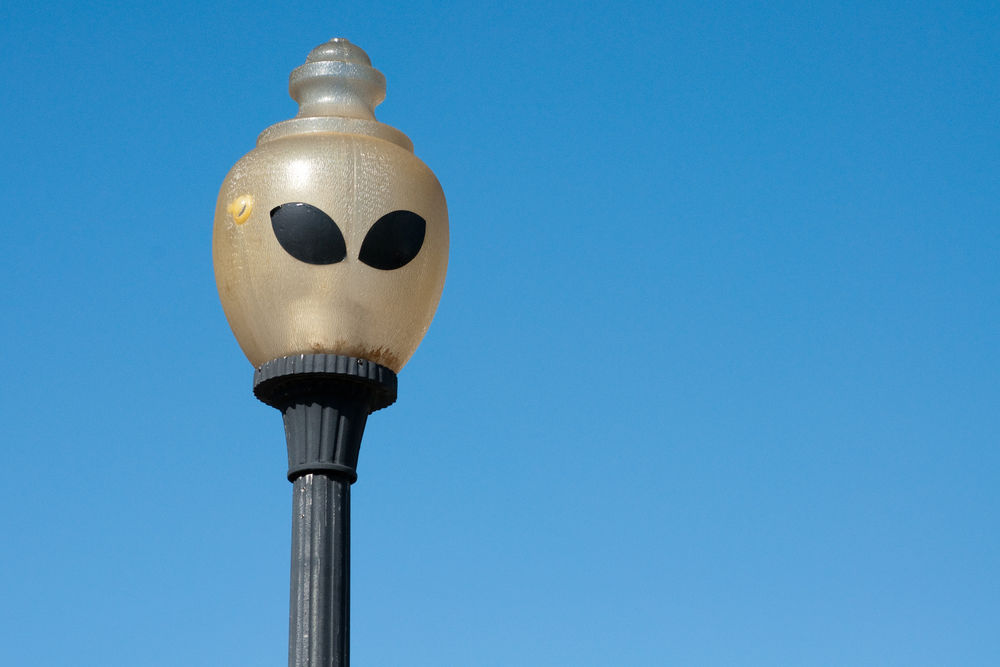 Unfortunately, I was unable to experience Roswell in full, as I was the acting cat-sitter for the evening. The cats were experiencing comedown stress from the drive and needed some much needed TLC, so I sent Adam off to get his fill of UFO lore and a simple postcard for our collection.

Guess what? We got pulled over again! This time was for slightly speeding through a school zone in a tiny town just across the north Texas border; oh and let’s throw in the license plate frame that apparently was another violation. Though to my surprise the traffic heavens graced us TWICE with just a warning. We have to frame these tickets somewhere or put them in a fucking scrapbook from our road trips.

I constantly forget to take pictures when we’re going on the road, or on a trip or if I’m out and about doing whatever. I feel like the constant need to take stories or video clips when I should have been taking more photos! I swear, I’m going to have to start carrying around my digital camera again. Seriously, in high school I had this camera that was like the first digital point and shoot; it was size of a brick, which I carried along with my flip phone and iPod. My BFF called me “tech girl” at one point. So, any clips from our road trip can be found on the Road Trip story from my Instagram.  ANYWAY, back to Texas: this day like yesterday was a long one and it felt even longer since we got to the Texas border in a mere few hours. We snapped a picture, took a video and I slapped some stickers on the “Welcome to Texas” sign. Then we had about 5-ish more hours to go in the car… sorry cats. I’ll have to have a separate blog post about how to travel with cats, because it can get TRICKY. 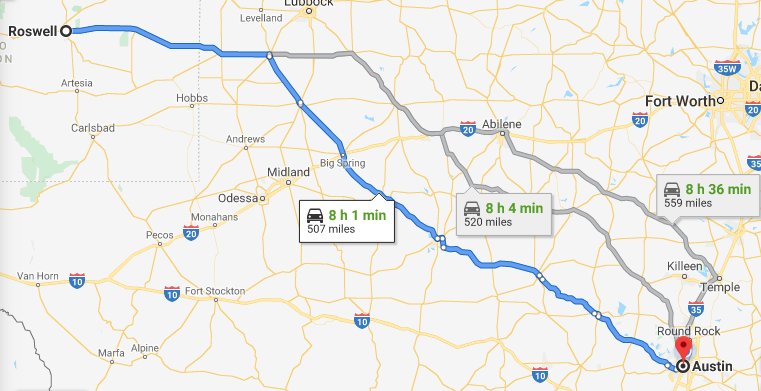 There are many ways into the intricate layout of Austin, Texas. As we left Roswell, we entered Texas through the northwest on Highway 380 through Plains (where we got pulled over) and Brownfield. At this point we cut south and the rest of the way is not on a major highway, but a smaller two lane road the rest of the time. We passed through many small outposts, farming towns and through an ominous thunder storm.

“Wouldn’t be a road trip without a some rain, huh?” Adam jokingly reminded of our torrential rainy exit out of Washington State.

Eventually the rain petered out and we were introduced to some humidity and thick countryside brush along the rest of the way into the city. We made it into Austin in the early afternoon and wanted to see if our place was ready to move into. Unfortunately, we had one more night to stay in a hotel. Though it was the most well kept out of all the roadside dumps we luckily got into. The cats perked up after being let out one final time. We thank our lucky stars to be in our new home now in one piece. We’re ready to get to work and see all that Austin has to offer. 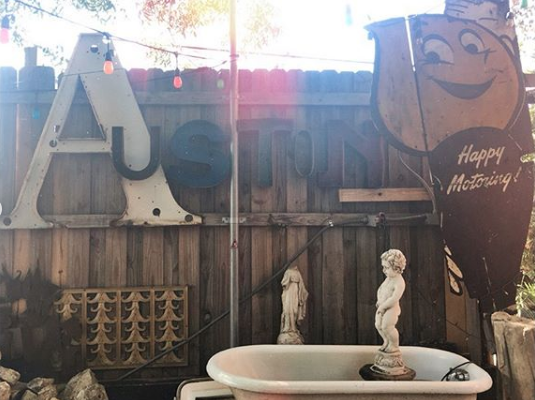